Rashad Salim (right) in a guffa (koracle) on the Tigris.

In 2021 Iraq will take part in the International Architecture Exhibition of the Biennale di Venezia for the first time. The artist Rashad Salim’s project â€œThe Ark Reinvented: The Expedition Pavilionâ€ (May 20th – November 21st). This year marks the 100th anniversary of the founding of the modern state of Iraq. Curated by Safina Projects and supported by Community Jameel and CULTURUNNERS as Piloti del Padiglione (Pavilion Pilots), the pavilion returns to the origins of Iraqi architectural heritage and celebrates the native architecture and watercraft of the Tigris-Euphrates river system, as well as the pioneering alphabet of making ‘from which early architecture emerged.

Salim challenges standardized images of the ark based on European boat building techniques and suggests â€œan ark of its time and placeâ€: an organic, draft-built structure, the design of which is based on the local building techniques and boat types that were ancient in the time Flood, a rise in sea levels about 10,000 years ago that created what we know as gulf. Salim’s “expeditionary art” practice uses the concept of the ark as a means of studying Iraq’s material cultural heritage. Since 2016, the Ark Re-imaginated project has engaged craftspeople across central, southern and western Iraq to revive and document the remains of traditional boat building, architecture and craft practices.

Doctors worldwide are calling for measures against climate-related health risks

The legacy, preserved from the earliest recorded history, has been threatened with extinction in the past few decades of devastating conflict and trauma. Through outdoor installations and digital elements, the expedition pavilion dynamically deals with its location and explores the connections between the delta wetlands of Venice and the proud boating traditions as well as those of Basra and the Ahwar (wetlands) in southern Iraq. Like Venice, southern Iraq is also facing the critical challenge of the Anthropocene, a climatic event comparable to the ancient flood. Ark Re-imagined meets the crises of our time by asking about the transformation processes that have shaped human culture and remain urgently relevant to our fragile future.

The project’s mission is to collect resources and people and to have an intercultural dialogue. Salim says: “The reinvented ark speaks to the title of this year’s Architettura Biennale – ‘How will we live together?’ – by applying the collection principle. â€The pavilion and the documentation of the project are supported by the Iraqi Fund for Cultural Health, which was set up by Community Jameel and CULTURUNNERS as part of the Future is Unwritten Artists’ Response Fund, a new initiative for financial and productive support of artist-led projects that help improve mental, social and environmental health after COVID-19. The pavilion program is being developed in consultation with the Healing Arts Initiative, which is being carried out in collaboration with the WHO Foundation under the auspices of the World Health Organization im As part of the United Nations 75th Anniversary Program (UN75). 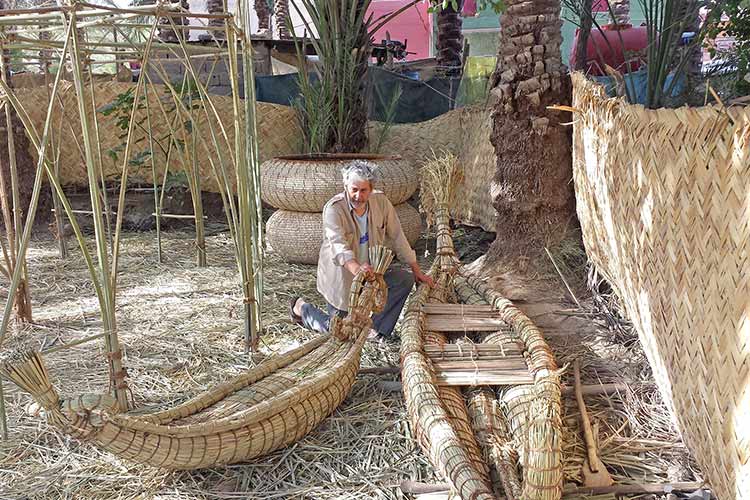 In 2020, the Ark Re-imaginated project was officially recognized by UN75 as an example of an artist-led project implementing the UN’s Sustainable Development Goals (SDGs).

George Richards, Director of Community Jameel said, â€œThis exhibit and the wider Ark Re-Imagined program go deep into Iraq’s past and address very immediate issues exacerbated by the pandemic, trauma, loss of identity and isolation. â€œPavilion production is co-funded by the ALIPH Foundation, while project research and program content have been supported by donors including the Arab Fund for Arts and Culture, the Arab Council for Social Sciences, Makiya-Kufa Charity, the British Council’s Culture Protection Fund in partnership with DCMS and Nahrein Network. The project commissioner is the Iraqi Ministry of Culture, Tourism and Antiques. The opening event of the pavilion in Venice was a conversation with Salim, which was held on May 20th by the TBA21 Academy in Ocean Space.

Salim is an Iraqi-German artist and interdisciplinary researcher with a particular interest in ecology and the history and development of culture and technology, which is reflected in old boats, indigenous architecture, handicrafts and intangible cultural heritage. He was born in 1957 in Khartoum in Sudan as the son of a German mother and an Iraqi artist / diplomatic father (Nizar Salim) from the well-known artist family Selim. He traveled a lot from birth, spent his childhood in China, Sweden and Yugoslavia, lived in Iraq during his founding years (1970-1982) and studied at the Institute of Fine Arts in Baghdad and at Saint Martin in London. 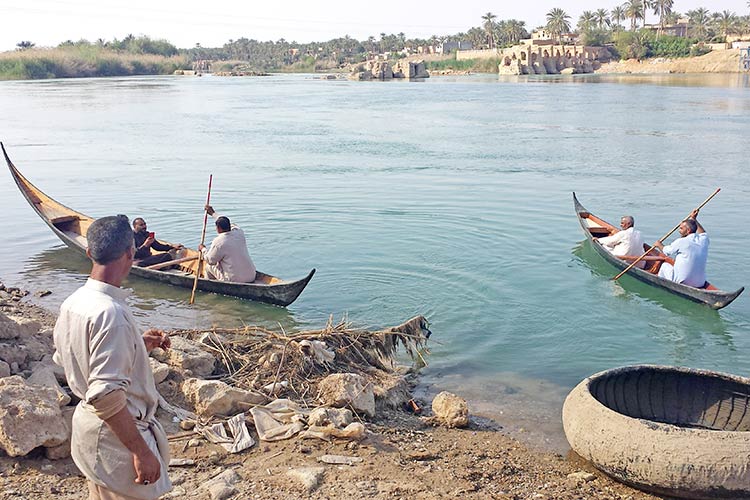 Guffa (coracle, foreground) and meshouf (canoes) on the Euphrates.

1977-78 he traveled as a crew member on Thor Heyerdahl’s Tigris expedition with a reed boat from Iraq across the Indian Ocean. In the 1980s and 1990s, he lived in Morocco and Yemen, where he worked as a sculptor and graphic artist, concerned himself with the local cultural heritage and co-founded cultural associations. As an artist, he has works in major collections including the British Museum and the Aga Khan Collection. From 1998 to 2012 he was trustee of iNCiA (International Network for Contemporary Iraqi Artists).

He has lived in London, UK since 1999 and has been returning to Iraq regularly in 2003, 2013 and since 2016. Since establishing Safina Projects in 2017, he has run a program of boat and craft workshops, marine heritage events and research, and capacity building in Iraq’s intangible cultural heritage, supported by the British Council’s Cultural Protection Fund, the Nahrein, among others Network and the ALIPH Foundation is supported. Public access to promenades and waterways is becoming more and more important in his work. With this goal he supports the establishment of a network of locally administered youth boat clubs in Iraq. Curator Safina Projects is a creative practice that aims to protect and revitalize Iraq’s endangered handicraft heritage, especially its ancient boats, through arts and cultural research projects that involve the Iraqi public and internationally.

Community Jameel is an international organization addressing some of the world’s most pressing problems and challenges, taking a pioneering approach based on evidence, science, data and technology in education, health and climate. CULTURUNNERS is an independent platform for intercultural campaigns, exhibitions, films and live events that promote pluralism, peacebuilding and sustainable development through art. Launched at MIT in 2014, it prioritizes artist-led projects that transform communities, societies, and systems, and encourage greater empathy across ideological and geographic boundaries.