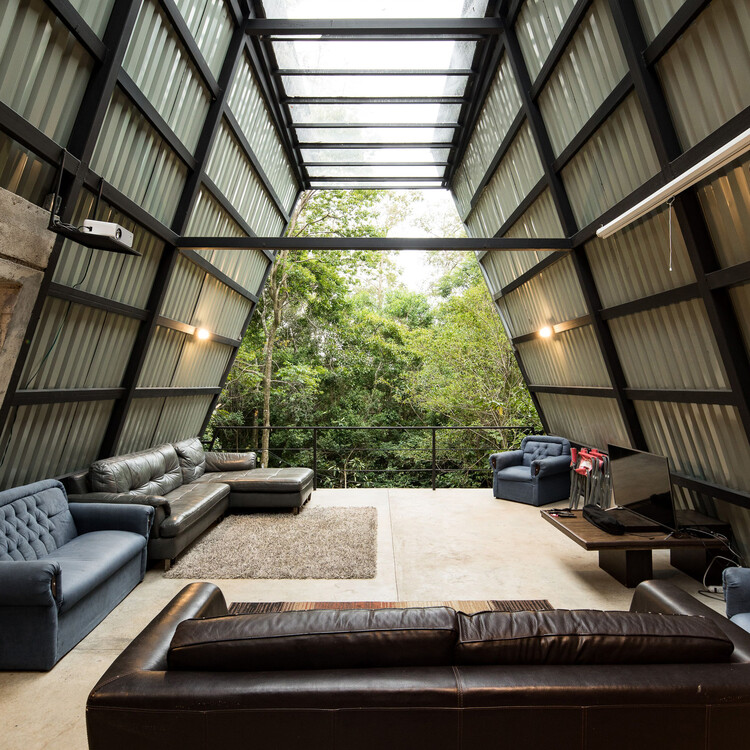 Text description of the architects. In one of the few small remnants of forest left on the slopes of Barva Volcano is Bromelia, a family project developed by one of our friends to house his family.

The concept of the project is born from the locus, from an epiphyte known as bromeliad from the bromeliad family. They live on logs or rocks that act as hosts, and their tank-like shape allows them to capture matter and water for their vital function. The area is an area where it rains or at least constantly sprays all year round, with an average temperature of 17 ° C and high humidity. In property we wanted to refer to bromeliad as a concept related to place, but discarded some of its properties. Instead of storing matter and water, the architectural building tries to reject it to create shelter and comfort.

A simple and inexpensive structure creates space from two levels, acting simultaneously as a wall and ceiling, allowing for rapid evacuation of water and other elements that come loose. Next to the bromeliad, the project rests on two concrete cores that structure it and from which it is suspended. This allows the natural runoff water from the ground to continue on its usual path. In addition, it allows correct ventilation of the mezzanines that help control humidity, this is coupled with controlled cross-ventilation and a skylight that, in addition to showing the time, also allows the entry of light and some heat.

The use of low-maintenance materials will allow the project to mature in connection with its context and that some elements will eventually be lost in the forest participating in its ecosystem while slowly and truly reclaiming its place.